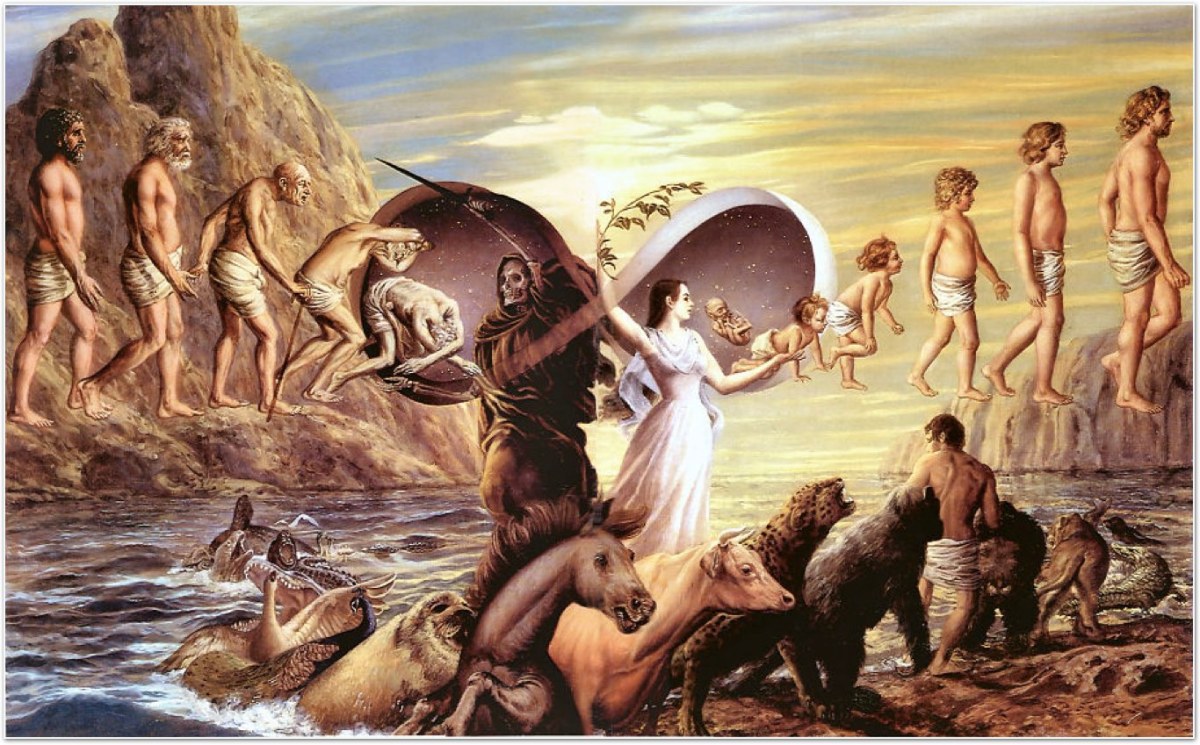 Whenever there is a chance, Mādhava is explaining essentials of Sanātana Dharma to his fellow Germans. Often, people respond by asking a variant of one of the following two questions:

As a Hindu, do you really believe that if something bad happens to a person, it is because he was evil in his previous life? Are you really so mean to think that it is his own fault?

As a Hindu, do you really believe that my pet was born as an animal because it has done bad things in its previous life?

Sometimes, people even quote documentaries from India or Nepal, where disabled people were insulted and thrown after with stones because their fellow citizens thought that they were bad persons in their previous life.

Mādhava then usually explains what he learned from Upanyasakars (religions speakers) and Āchāryas: That the idea of a simple mechanical link, of the kind: „killed father, will be blind with one leg in next life“ is false. It is true that all beings ultimately experience the fruits of their own actions, but the manifestation of these fruits is not straight forward. This is confirmed by Kṛṣṇa in Bhagavad Gīta 4:17, where he ends the verse with

Our Āchāryas emphasize that our innermost essence, our Jīva, has no beginning and no end. It is moving from one body to the next, producing complex interactions between lifes along the way. But what are authoritative statements which back this? And how to put all of this into a crisp explanation? Some references can be found in Bhagavad Gīta 2:12 and 2:13, where Kṛṣṇa briefly explains the way of the Jīva. In Bhagavad Gīta 4:19 and following verses, Kṛṣṇa explains how to get rid of Karma. What we do not find in the Gīta is a concise description of the workings of Karma.

Such a description is available in the Bṛihad-Āraṇyaka Upanishad. The fourth Brāmana of the fourth Adhyāya (verse 4.4.1 to 4.4.6 in modern technical counting) contain a concise description of the process of death, the nature of the self (Jīva) and of the workings of karma. The author learned about this section of the Upanishad in a recent answer on Quora by Rami Sivan, a very knowledgable but also somewhat controversal Śrī Vaiṣṇava with Western roots.

This part of the Upanishad is remarkably clear and easy to read. Here is the translation from „The Thirteen Principal Upanishads“ by Ernest Hume (1921), available at archive.org, refined with aspects of Rami Sivan’s translation from Quora, of Swami Krishnanadas Translation and the original Sanskrit text.

The first verses give us a description of the death process from a Vedic perspective. As life-energy, which is called prāṇā, is moved from the limbs to the center of the body, the heart chakra, the dying person begins to feel cold. We can see from the look of someone’s eyes whether he is still alive or if he is already dead and his travel has begun. The second verse emphasizes this by enumerating the different senses which stop working as they are drawn inwards with the prāṇā. People who were accompanying a dying person report that touch, the holding of a hand, is the last thing the dying person was able to do.

The third verse gives us a straight-forward comparison: the body is like a blade of gras and the Jīva is like a worm who stays on that blade of gras for a while and then moves to the next. In order to do so, it has to contract:

In the same way, the Jīva contracts those layers that follow it and then goes to the next body. However, we must not forget that these movements are ultimately not due to the inherent power of the Jīva. They are enabled by Brahman, the totality, God. In Bhagavad Gīta 9:6, Kṛṣṇa points out that he is the ultimate support of each and every aspect of reality. So while the Jīva does indeed contract and move, this is not an independed action, it is framed and enabled by Brahman.

In the fourth verse, it is emphasized that the new body will be better than the dying one. The Jīva can gain a fresh human body, after staying for a while in the realm of the forefathers (Pitru Loka), it can gain the body of a Deva or a body of any other being.

The fifth verse contains remarkable enumeration. In contrast to a large number of comparable enumerations in Vedic texts, the enumeration here is incomplete. For example, amongst the senses, taste and touch are missing. Among the elements, fire is missing. The author is not in the position to explain why this is the case – but we note that the senses of taste and touch produce the strongest desire, and the energy within the element of fire is the most obvious. Anger and desire are the very roots of our downfall and the door to our way up, as pointed out in Bhagavad Gīta 2:62ff.

The enumeration emphasizes that Jīva is Brahman, is the totality, it is all senses, all elements and the whole spectrum of possible moods. Statements like this and seemingly contradictory statements from other Upanishads have led to endless debates between Vedic philosophers. We outlined in our article on Śrī Vaiṣṇava philosophy that our tradition’s philosophy, Vishishtadvaita, perfectly resolves these apparent contradictions. Vishishtadvaita teaches us that Jīva is Brahman in the sense we call a person „Joe“ while in actuality, neither the fingers nor the hair nor the legs are Joe, Joe is the conscious being that inhabits the body of Joe. In the same way, Rāmānuja points out, is Brahman is the innermost essence of the Jīva, the Āthmā of the Jīva. Hence it is legitimate to call Jīva Brahman.

The 6th verse gives us the reason why we return at all to this world. Having stated before that the Jīva is Brahman, one could ask why Jīvas return to this world at all, why it moves from body to body like a worm between blades of gras. Isn’t its essence Brahman, the totality, the ultimate, God? Why is it so miserable then?

The verse points out that the problem is attachment. The Jīva has been attached to sense objects and acted due to that. Thus action is like an addiction, the Jīva can’t let go of its attachment to sense objects and, by extension, the actions initiated by this. The sanskrit word Karma simply means action, work, in a very practical sense.

This shows that Karma is by no means a trivial mechanism for punishment. It is the continuation of a basic approach to existence, which is shared by all beings: they act to enjoy. Be it a plant that grows in the direction of the sun, be it a deer that looks for the most tasty weeds, be it a human looking the „good life“ of barbeque, beer and Netflix binge watching or be it a Deva seeking heavenly maidens and worship by lower beings. Some actions might have good repercussions, others bad ones. The criterion is whethe other beings experience suffering or delight due to the action. Both will return to the Jīva in due time. In Patanjali’s yoga sutras , we read:

Sutra 3:23
The Karmic effects of ones actions are immediate or delayed. (…)

So, a proper answer to the above questions would be:

Karma is not a punishing menchanism, it is a side effect of actions and often produced unknowingly. Its effects can be delayed. A person does indeed experience bad things due to his or her past actions, but these might have been done long ago.
Likewise, a person that does not experience bad things right now should not assume that it does not have suffient bad karma – this karma is just not manifesting itsself now.